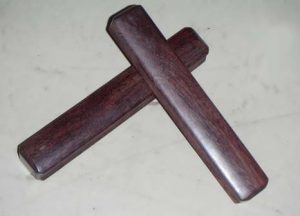 When we talk of a set of claves it is usually a wooden instrument as per its original form. Nowadays even plastic or fiberglass variants are available. The instrument comprises of two sticks. One stick needs to be held in the palm of one hand while the other is held in the other hand. Sound is created when the stick on the palm is struck. This is the male clave while the striking stick is the female clave. The sticks might vary in size but in general the claves are usually eight inches in length and are about an inch in thickness. Claves are usually dowel shaped with rounded and ends that are evenly cut. Many say that the Cubans invented this percussion instrument though there are influences of aboriginal tribes of American, Spanish and African origins as well.

Similarities with other instruments

One can explore this instrument as it is an inexpensive one to procure. Children as well as learners of music can easily procure the instrument. There are different varieties of the instrument available though rosewood variety is considered the best. Depending on the material, the instrument’s sound also changes. For instance, the fiberglass material also produces a unique sound. Many claves are hollow for gaining certain resonance and tone.