Sarabande is a form of slow dance that originated from Central America. It is a popular performance dance that is beautifully crafted and what makes it unique is the music that accompanies it. the first mention of the dance and music was in 1539 in historical records. This genre of music or compositions was also known as zarabanda as found in poems of the poet Fernando Guzman Mexia. The poems that he wrote were the basis of the dance and music that was formed as a distinct genre later on.

Nature of this artistic form

The music helps to construct a dance that is of a triple meter formation. By the time the New World colonists were present, this dance form started to gain popularity in colonies. Nationals of Spanish origin who travelled back and forth carried the art form of sarabandes to different regions as well as into the homeland. However the form of dance was considered erotic by many. For these reasons the dance form was banned in 1583 as it was found too obscene to be exhibited in public shows. However, the music and dance form are still evident in many literary writings even today. 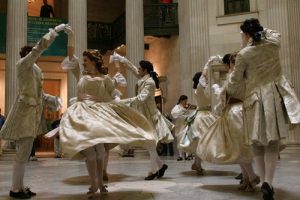 The Baroque period saw a resurgence of sarabande which also found its way into instrumental suites. Several compositions of sarabande genre are now mixed in modern compositions and form the base of popular dance forms. The triple meter form that is a distinguishing feature of the dance has been slowed down in speed in modern versions. Accordingly the music too has become sedated and more attuned to the modern sensibilities of the European society. In such ways a new age version of sarabande music and dance was formed.

Changes in the 20thcentury

In the twentieth century the music of sarabande saw several revisions. For instance, the tempo of the music increased from the sedated version that it had moved to. Composers like Debussy and Satie were responsible for the revival. The music was revived and brought back to its full glory as well as accompanying moves revisited to suit the tastes of the modern generation. Sarabande music is considered a treat of Spanish culture and it is said that this art form helps bring back romance into dance. Today it is still considered to be an epitome of Spanish dance though there have been considerable influences of US, English and French culture in the dance. The music composition has also undergone considerable experimentation.

In original Spanish music creations of this genre one will still find the 12/8 meter, percussions and a quick pace to it. though several changes have come about in the music since then the 3/4th time is a feature that still remains in the scores along with an accent that arises on the second beat. Those who compose or study music look around for Sarabande music scores and get inspired by the same even today which is an integral part of this romantic dance form.