Spanish Baroque music is basically a combination of school as well as popular music. Melody, instrumentation, color, and rhythms all have a bit of Arabian touch to it. The development of Baroque music took place not through court music but popular music. Thereafter, it was included into the tradition of Spain. The Spanish that belonged to the 18th century were always fascinated by the 16th century’s polyphony and music was composed in such a style.

The composers of Spain like Antonio Literes, Sebastian Duron and Jose de Torres made use of combined rhythms. As far as Literes is concerned, there are quartet of 4 different voices and each using a different rhythm while singing with accents that falls in various places. Several Spanish composers during that period were dissatisfied with the voice and the rhythm of the bass. They added several rhythms with the percussion and continuo.

Some of the complex rhythms like a flamenco drum player restructured this particular atmosphere. The changes in the rhythm in Spanish baroque music remain constant. When it comes to the pizzicato string continuo which played similar to guitars, the typical tetra chords, the castanets combined with classic gallant is something that attracts the listeners always.

The tono humano is basically a Castilian language performed for theatrical productions in addition to chamber music. It is a vocal composition with either one or more voices with a usual structure based on a compilation of verses and refrain. The main themes involved here are tragedy, triumph and love. The basic structure and its pattern, the range of styles and forms areconsiderable and also include a prolonged passage of recitative of the Italy. The stylistcharacteristics of the tono humano are basically the use of beautiful rhythms that are popular hemiola styles and lyricism that never fails.

Scope of theatre music in Spain 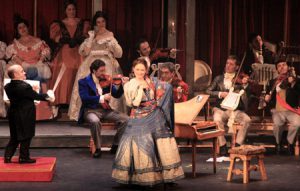 The theatre music indeed became quite popular in Spain in the 17th century, mostly in court circles. The combination of elements exists from the operatic innovation patterns of Italy, the court theatre music of France and the original vocal and instrumental practices of Spanish. Philip IV had a keen interest for theatre and during his kingdom music evolved in the various kinds of stage productions such as the Comedia, the zarzuela and Opera. The comedia was interpolated by none other than tono humano. The zarzuela is basically a dramatic entertainment that includes arioso and recitative passages in additionto tonoshumano. As far as Italian styled opera is concerned, it took a little time to form itself in Spain.

The foundation of zarzuela dates back to the 17th century and its name was originated from a pavilion that was overgrown with bushes of blackberry in a remote area of El Prado Park. Several actors would gather at this pavilion to exhibit their plays and also entertained the King Philip IV.  The major difference between Spain and other European countries is merely the nobility. The noblemen in Spain that were not close to the court did not have much influence on music when compared to the provincial noblemen in France and Italy. The composition of music mainly took place with popular composers in Madrid.